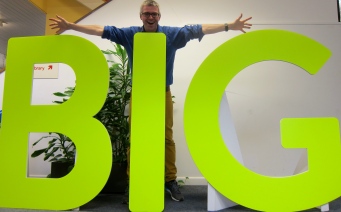 Recap: Our campus library is currently closed for refurbishment, and as a result, a temporary pop-up library has been established for the duration of the summer. I recently spent a day working there.

There are so many pop–up things these days: pop-up shops, pop-up restaurants, pop-up cinemas, so why not a pop-up library? There is something buzzy and now about it, something so intrinsically Twitter and social media-friendly that the very phrase pop-up brings to mind all kinds of connotations of cool; it is here and now and you don’t want to miss it because it will soon be gone, so catch it while you can!

In all honesty, working at the pop-up library was a deflating experience. There were no books, other than a slim shelf of reserved items that were waiting to be collected. Can a library really be called a library if it doesn’t have any books? The books, you see, are all in the actual library, even though it currently resembles a building site. Staff are permitted to enter the library once a day, under the supervision of the builders, to collect any books that have been reserved, to take them to the pop-up library where students can pick them up later.

Since you asked, no, the pop-up library is not in a tent or under a bunting-covered gazebo. Instead, it is housed in what used to be a student lounge, so there are computers, a kitchen area, and plenty of seating. Library staff have taken over two meeting rooms; one has become our break room and the other is used to store essential library items.

The space does work as a point of contact between library staff and students, but it feels strange to refer to it as a library. The pop-up library will remain open for about nine weeks, or until the refurbishment work is finished; target completion date is by the beginning of the next semester. Due to the nature of the pop-up library, it is manned by just a few members of staff, so in the meantime, my colleagues and I will be mostly working at a different campus library.

Have you ever visited any form of pop-up establishment?